Sarah Palin: Not America's Next Top Model Either

I like totally spaced on the premiere of America's Next Top Model a few weeks back. So last night I went straight to CWTV.com and got caught up with transgendered Isis, darkly sexual Elina, and can't-quite-figure-her-out Clark.

The premiere episode had the following exchange between Tyra and ultimately-axed contestant, Susan. With a BA in American and English Literature from Harvard University, Susan has never heard of Jack London's White Fang, Daphne Du Maurier's Rebecca, Pearl S. Buck's The Good Earth or Shakespeare's Viola. She does though remember Jane Eyre. She probably saw the movie with Keira Knightley. (Did she even make Jane Eyre? Yet?)

It's amazing to watch Ms. Banks spout off the names of these books. She dedicated the second episode of ANTM to getting out the vote. Granted it was girls in minis in front of a voting booth but you do what you can. Tyra, you are fab-oo!

Today, I happened on this clip of Katie Couric asking Sarah Palin why Alaska's proximity to Russia can be considered foreign policy experience. With a BA in Journalism from the University of Idaho, Palin looks caught in the headlights and can't put a coherent thought into a grammatically correct sentence. She does though complete a few towards the end with the type of brilliant insight I want in a vice president.

And for a quick take on Palisn't's (sic) escapades in the un-truth, here's a pictorial by Tim Dickinson of Rolling Stone called The Truth About Sarah Palin.

Sarah Palin's credentials as a reformer are nothing but spin. She has sided with Big Oil, lobbied to increase pork spending and abused her public power to carry out personal vendettas. Here's a guide to separating myth from fact.

This is a nightmare.

I have read Obama's economic plan and there is no tax cuts as he promises! However, under his economic plan he will be more than happy to have the IRS complete your yearly tax returns for you. This is in black and white. But- he only TALKS of tax cuts.

And I went on as I often do, probably a little too snarky but, at this point, I don't want to be liked. I want a vote for Barack Obama. We are drowning and Barack offers a lifeline of civility. And in the video below, Barack speaks with pride in the knowledge that his plan is right and conviction in his ideas - like a President should.

I'm not sure what other economic plans are out there but this sentence fragment links to the real economic plan of Barack Obama and Joe Biden.

Which Candidate Will Raise Your Taxes?

Excellent web page from slsinsf, my BFF in SF. ObamaTaxCut.com uses a small computer program (or servlet for the technically inclined) to figure out the approximate tax cut (if any) you would receive under an Obama presidency and under a McCain presidency. (The underlying mathematics was derived by the independent and non-partisan Tax Policy Center and based on the economic plans available on each candidate's web sites.) As most McCain supporters believe Obama will raise their taxes, here is a real-time way of finding out (roughly) what each presidency will mean to your personal bottom line.

I would receive no tax cut under an Obama presidency but money isn't everything. Truth, compassion, and honesty are part of the picture. Oh, and health. Don't get me wrong, money's there too; I'm just not an extremist.

And she's nowhere near the kitchen. She's on The View.

All this relates to her appearance last week with John. A lot seems to have gone down following the interview and I thought it was neatly and fairly summed up in this segment from CNN's Showbiz Tonight.

But most important is one of the commentators. I don't know who you are are Lauren Lake but, girl, you are my new best friend!

Which Candidate Is Better Educated?

No matter how old I am or how many jobs I may apply for, I am always asked about my education and college degree. Here are the answers to that question regarding our presidential and vice-presidential candidates.


* As far as I know, the United States Naval Academy doesn't qualify their degrees (as others do with a B.A. or J.D. - doctorate of law) so I added John McCain's ranking as the qualifier. Copied from the McCain web site regarding his education:

John attended college at the United States Naval Academy, and launched a 22-year career as a naval aviator upon his graduation.

Interesting article by Phillip Butler, a man who was with John McCain during his internment in Vietnam. John McCain uses this time as a reason why he would be a good commander-in-chief but this man doesn't think so.

I Spent Years as a POW with John McCain, and His Finger Should Not Be Near the Red Button

Just add it to the pile. 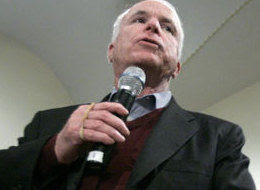 John McCan't: Please the Ladies of The View

All dressed chromatically in black and white, three of the ladies were on top of it with Barbara seemingly showing her true colors, Whoopi not showing enough of hers, and joy finally coming into her own - for a few minutes anyway. Sherry didn't say a word until she threw a couple of softballs to Cindy in part 3 while Elizabeth prided herself on her question concerning Roe v. Wade, "No softballs from me." She's quite the journalist.

Someone should have called McCan't out when he touted Palisn't as the most popular governor in America. Is that per capita? I think Arnold Schwarzenegger might have something to say about that statement - at the least.

Cindy-bot joined for part three. She has a good engineer.

Here's a link to a very interesting account of the Alaska Women Reject Palin rally.

And here's what Tina Fey has to say on the whole Palisn't matter.

UPDATE: I felt I should update this post with the real reason I started using these names for John MCain and Sarah Palin. I was walking my dog through the neighborhood and saw a few houses with signs that read, in the Obama campaign blue color and font, NOBAMA - with a slash through the O. I felt that was a deceptive way of supporting your candidate (similar to the types of things I've read about in previous campaigns). So, being the writer, I went to the place of turning the last names McCain and Palin into grammatical negatives. And McCan't and Palisn't is what I came up with. Not as polished sounding but I only have until Nov. 4. Now I've written a few entries and, although I like the flow of the titles (Cindy McCan't: Take the Heat - very cute), I do understand that using these names is like putting a sign up on my lawn. I am a little embarrassed so maybe I'll stop. Oh...we'll see.

John McCan't govern this country with intelligence and foresight as he's proven with his consistent pandering to special interests and lying in the television advertisements that he approves. All for a vote. Does he believe in this country? Or in himself as a President?

Sarah Palisn't qualified to be Vice President. Can McCan't, with the millions of citizens in the United States, not find a person with more than 4 years of municipal and state experience to run this country in case he, THE 73 YEAR OLD MAN AT THE TOP OF THE TICKET, dies?

That's taking this country into the 21st Century using a little red wagon.

Matt Damon speaks with intelligence and aplomb about the nomination of Sarah Palin as the Republican Vice Presidential candidate.

My hairdresser scared the sh*t out of me.

You're really voting for Barack Obama? His name scares me, she said.

His name? Here is a woman living in the cosmopolitan center of the Rocky Mountains who thinks John McCain was the better choice for president because his name was Anglo-Saxon? I asked her to please educate herself on Barack Obama before November 4 and not just spout off, what sounded to me like, talking points from Fox Television. The people in this country can't take four more months, much less four more years, of Republican rule.

One of my favorite songs from the '80s* took on a whole new meaning when I heard it on the way home. The song speaks to the spirit of Barack Obama and his supporters. The video clips give you perspective on what should and should not be feared. Please watch it, dance along if you'd like, and use the links below to get more information. Your fellow citizens will appreciate you for doing that.

all the best,
michael

*Change in the Wind performed by the Boston-based band Face to Face with vocalist Laurie Sargent from their One Big Day LP released in 1988. How prescient are they?

Tired of Toein' the House

Check out Rocky Burnette's hit from 1980 because sometimes we all get Tired of Toein' the Line. It's how I feel about cleaning this house every time a potential buyer wants to look at it.

Recognize me without the red glasses? I still wear them sometimes.