Hi. They call me Max.

They would be Alpha and Maxi-Me. Alpha wears glasses on his forehead and Maxi-Me wears them on his eyes. (I think they go on the eyes.) Alpha is Alpha because he's from New York. Maxi-Me gets the pillow next to Alpha when we sleep which I get when Maxi-Me is working. He's bigger than me. Maxi-Me. 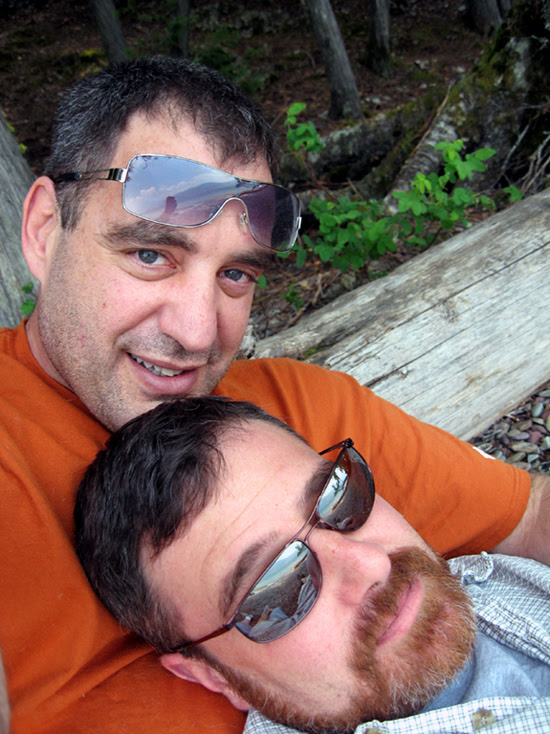 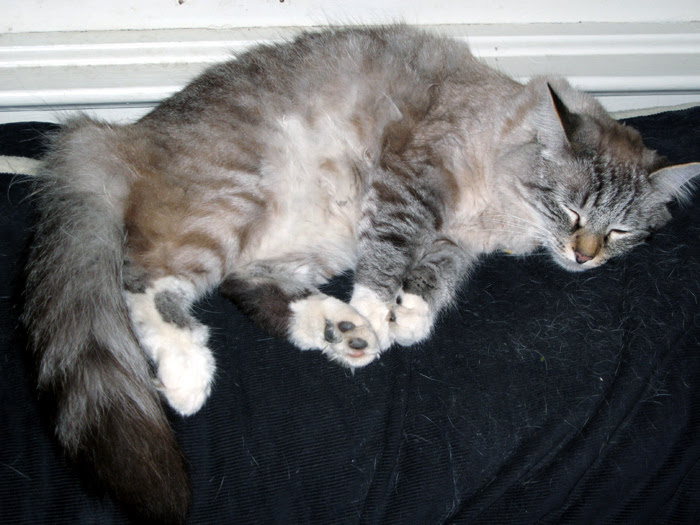 Both Alpha and Maxi-Me kept moving around inside the mover. I liked it better when Alpha was behind the steering circle because I could see. 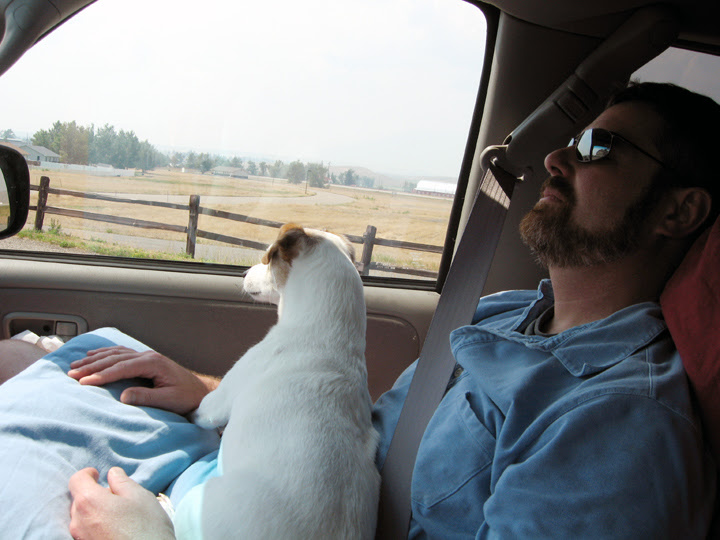 If Maxi-Me was behind the steering circle I was shoved in the back seat with my poop bags. Alpha's boss. 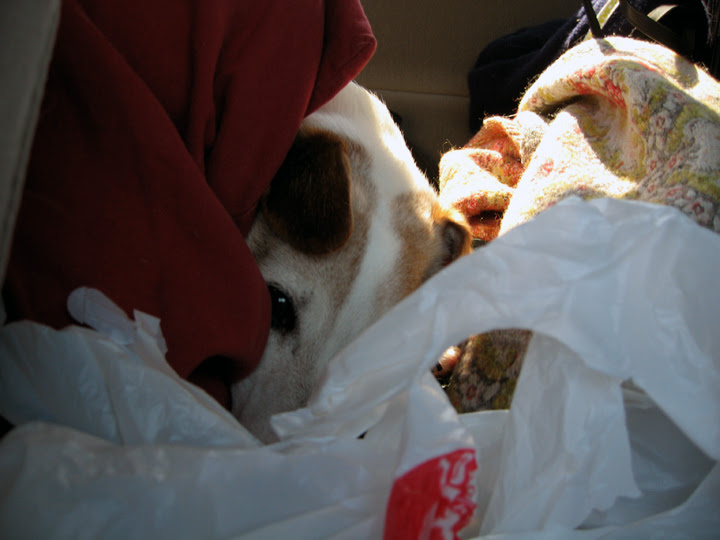 The first day, we made it to Gillette, WY and were looking for a place to sleep. We had to stop a few times. Maxi-Me kept saying No Pets Allowed but I didn't get that 'cause Lucy wasn't with us. After we left the mover, they locked me in the room with that square thing on, showing me a lot of moving color and sound. Sheesh, don't they know it's harder to sleep with that on?

When they came back, I could smell food. They were talking about having had iceberg lettuce for a salad. It seems Alpha had a bag of spinach in the car that he retreived and brought into the restaurant. Some lady from New Zealand then wanted to know where Alpha got the greens. He told her but unfortunately had none left to share. The lady was one of six members of a kiwi Harley Davidson gang that had come here (with their bikes) for the Sturgis Motorcycle Rally. None of us thought any more of it...until the next day. 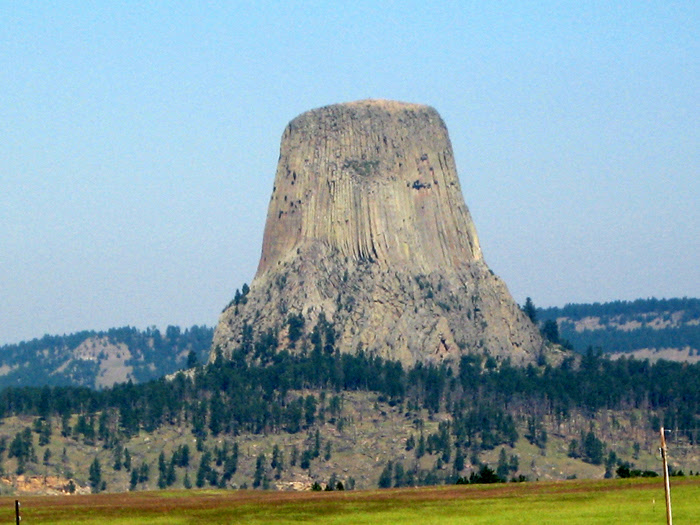 We drove to Devil's Tower the next morning. The entire trip there the mover was bombarded by loud sounds. Maxi-Me said the motorcycles were in full throttle. When we got to Devil's Tower, the cacophony was in surround sound. There were more than 16 motorcycles. (I can only count to 16 - four per paw.) We decided not to stay because it was so loud it ruined the ambiance of the natural setting...or as natural as this setting can get. 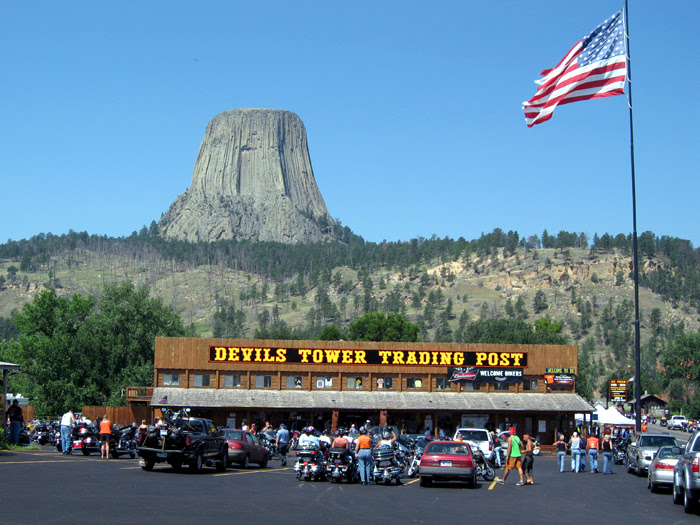 America in a Nutshell

Next stop, the lovely C'mon Inn in the town of Bozeman, MT. It was a very nice place to stay. Lots of water in the lobby with secluded hot tubs and waterfalls - none of which I could go in. If you're ever in the midwest, go on in the C'mon Inn. 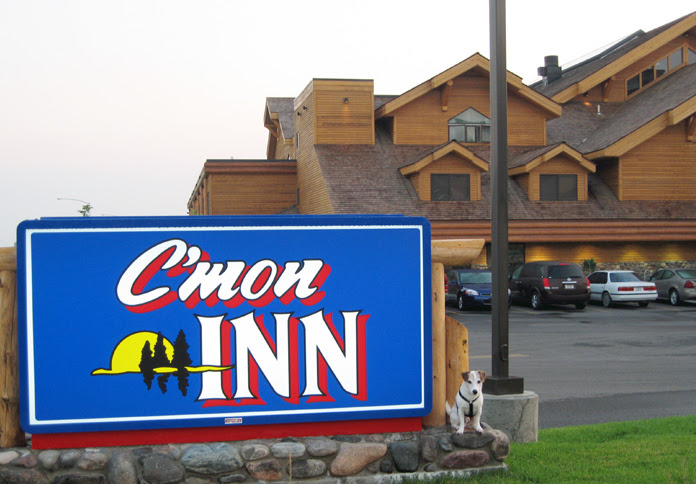 From Bozeman we drove straight to Kalispell. At this time, we started to smell smoke from the fires that were burning all over the region. 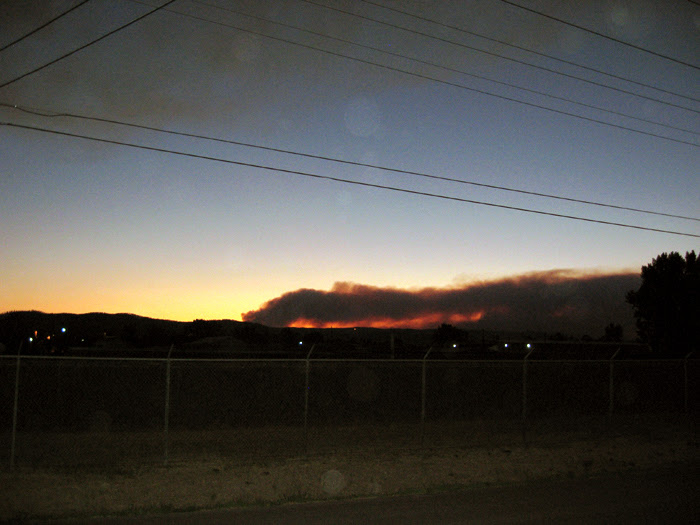 The mover finally stopped for what turned out to be two dark go-sleep's. We met two ladies that live in a house with animals like Alpha and Maxi-Me and me do. They had some animals I had never seen before. 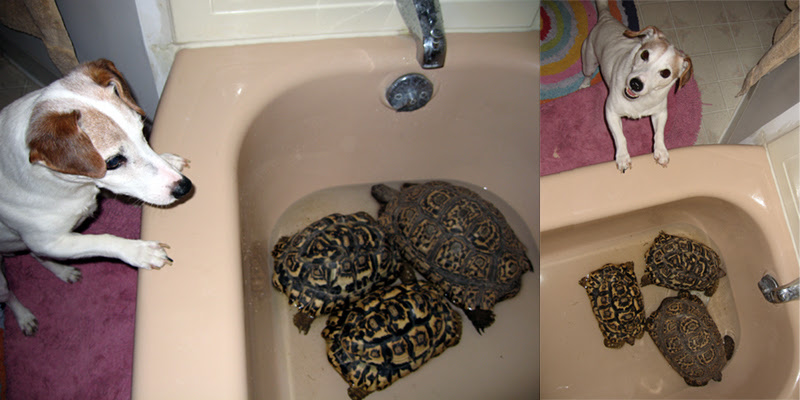 I love the ladies. Look what they gave me when Alpha and Maxi-Me went to Glacier National Park.

I thought I'd let Alpha tell you about Glacier:

In order to do Glacier right you'd need three days minimum. We had one afternoon. And there were so many cars and people that one afternoon that the park rangers were letting everyone in for free. As it was we had to wait almost a half hour to get in the park and they were just waving you by. 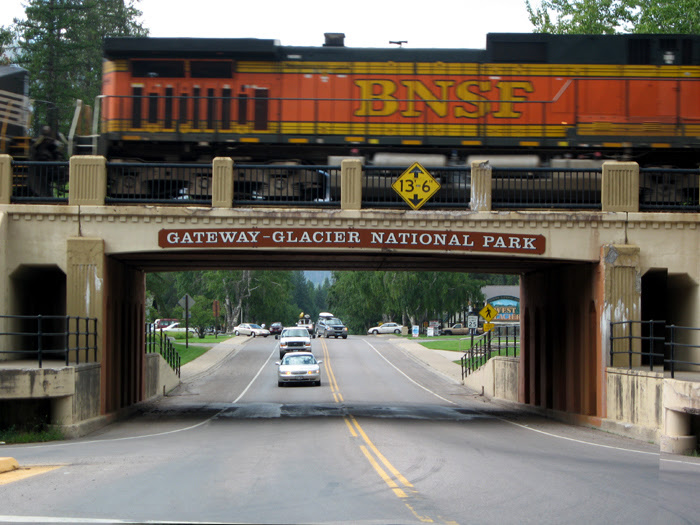 We went to Lake MacDonald first. It was quiet (thankfully) and beautiful (obviously) despite the smoke that was hanging in the air from the forest fires burning in the area.

Avalanche Creek is beautiful but, being the most popular trail, the throngs of people were annoying (screaming kids; yuppies with baby carriages navigating a slatted path; a Christian group that had a dog on a leash despite a big sign that said No Dogs On This Trail [Editor: WTF?]) So we decided to leave the sprawling throngs and take a less-travelled road up the east side of the park. As it turns out, we came upon a portion of the park that was felled by fire in 2002 - apropos considering the fires tearing up the region on the other side of this mountain. 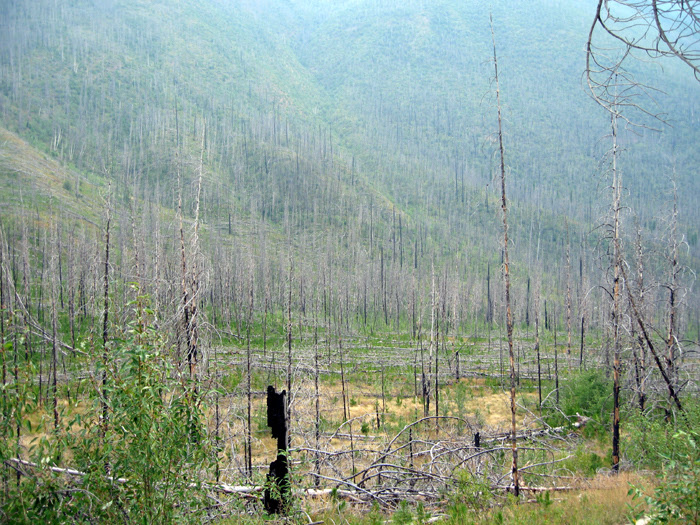 From the car, desolation was all around us; the trees were black or fallen. From the car, there was nothing to see. As we drove the sixteen mile road to find the trail on the map we started sensing something. At about mile 8, George voiced what I had been thinking.

'Look at all those baby pine trees. They're 2 feet tall.'

'And those are the trees we have in our backyard, aren't they?'

'Birch. I didn't know they could grow here.'

'And look at those wildflowers.'

We drove a few more miles, found Huckleberry Mountain and got out to walk the trail.

From the road, the skykline of black tree skeletons were ominous. But from the trail you could see something was happening lower on the forest floor. There was a carpet of new growth. The forest was being born again (in a good way). The pine trees were two feet tall and growing. There was a chipmunk. The wildflowers were covering the forest floor in yellow and purple. There goes a butterfly. There are Alpine trees growing. It's raining. The birch trees were fast-growing, some of them six feet tall. Alot of this new growth would probably one day be overtaken by the larger pines and become compost for the florest floor. But right now this was an amazing sight; and considering the western Montana fires that we had been dodging since arriving in the state, this seemed a fitting way to see Glacier. I had expected snow and mooses [Editor: Why isn't it meese like geese?] but George and I got to see something very spectacular, the birth of a new forest.

The next day they locked me in a room again and went for a rafting trip on the Flathead River. Boy. We left the ladies the day after the raft trip and were in the mover for a long time. Some little stuff happened but that's not important. We had a fun time and we're home safe and sound. That's important.

NOTE: You can see pictures of Glacier and the rafting trip by clicking the gallery image. 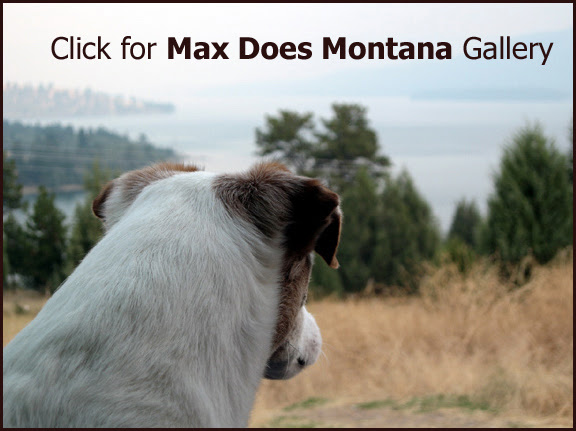 Extras is Something Extra and The Comeback Should

OK I'm a few years late on this - you know, the not having cable thing and all - but I just caught up with Extras and what a smash. The second series from Ricky Gervais of 'The Office' fame, Extras is just as good if not oftentimes better. It concerns Gervais as Andy Millman and the luminous Ashley Jensen as Maggie Jacobs, two professional background artists. Andy is an actor and always looking for that elusive part (or line) while Maggie keeps looking for that elusive man. Each episode centers around the particular project the two extras are working on and thus involves the particular star of said project. 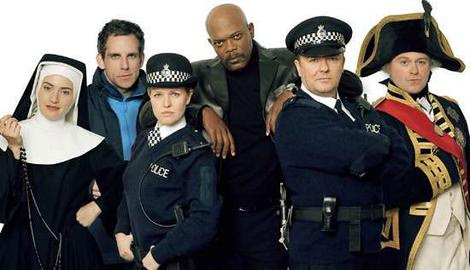 The first epsiode with Kate Winslet is classic television. Her explanation of why she is doing a film on the Holocaust is tasteless and hysterically funny. But then she tutors Maggie on the fine art of phone sex and I will never look at her the same again. Kudos to Winslet for lampooning her celebrity and going along with the script.

Other actors do the same: Ben Stiller and Ross Kemp are certainly in on the fun. Stiller's rant on his movies's grosses and his take on the signifigance of Dodgeball to this particular drama he is directing is over the top and spot on all at once. And Maggie's confusion over why Kemp is NOT a member of Spandau Ballet mirrors the confusion most Americans would probably feel when watching this scene but, for me, it gently solidifed Ms. Jensen's skill as an actress. (I've never seen it but I read that she is now on Ugly Betty; gotta start watching that one - which my mother has been telling me for the last year.) 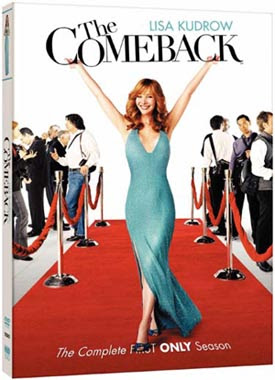 I found the tone of this series similar to that of The Comeback, the HBO series by Michael Patrick King and Lisa Kudrow. The Comeback was not a ratings success (although it was certainly an artistic one) and was cancelled after one season. The episode of Extras with Les Dennis is as funny and painful to watch as many of The Comeback's best including the second to last episode, Valerie Shines Under Stress. Both of these series' are beautifully written and wonderfully acted.
Posted by A Man and A Mouse at 7:34 AM No comments:

I am a playwright.

My relative lack of experience though makes that statement sound jarring (and a little frightening). To calm my nerves, let's start at the beginning. In January I decided it was time to get off the pot and write the play that had been ruminating in my mind for two years. I searched for a playwriting class so I could learn what the hell I was supposed to do and found the Playwrights Showcase of the Western Region and it's adjunct Boot Camp for Playwrights scheduled for six months hence. I registered, scheduled a week off from work, and took a local playwriting workshop with Terry Dodd in the meantime. Thanks to Terry and the other writers in the workshop I finished a first draft of The Bride's Side the day before the combination of classes, workshops, and play readings I had signed up for way back when was slated to launch.

The Boot Camp began on Sunday, July 15 with three days of instruction led by my new favoritest (sic) person in the world, Aosie Stratford. Aoise (pronounced Ay-sha) was imparting the type of information I'd been yearning for since the beginning of the year. She was talking about the playwriting process and what we needed to do to write and rewrite (and rewrite) the best play possible. Thank you Aoise from the bottom of my electronic inkwell.

The Showcase followed the Boot Camp; it began on Wednesday and continued through Saturday. The days were filled with play readings followed by critical analysis. The readings were interspersed with workshops lead by many of the Showcase luminaries. Aside from Aoise, the Showcase luminaries included Dawson Moore and Anna Garcia-Romero, the two other Boot Camp instructors. Additionally, Christine Emmert, Edith Weiss, Scott McMorrow, Richard Dresser, Susan Lyles, Scott Gibson, Chip Walton, and Kent Thompson helped to light our way.

The readings were wonderful to see and hear. It gave me a real sense of community to be with others who call themselves playwrights and discuss their works in development. Two of my personal favorites were The M Word by William Missouri Downs and Bel Canto by Thomas Pierce. I also attended the Showcase workshops which gave me even more invaluable information.

I've organized all the notes I took over the 7 days and have put them here so I know where to go when I need information, inspiration, or innovation. Feel free to come back if you need the same. Thanks to all those mentioned and especially Pamela Jamruszka Mencher and her staff for putting this incredible experience together.

Oh, by the way, I was given this badge on my first day of the Boot Camp. It's nice to see the confirmation as I begin the process of submitting and developing The Bride's Side, and researching my second...um...play. 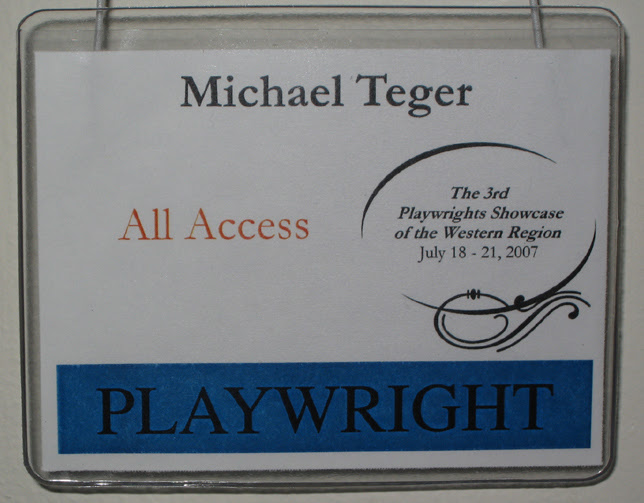