Of Boobs, Barb Wire and Mahogany

In the early 1980s, I lived in Hoboken. For three years I rented a five room railroad for $300 a month. When I moved out of the flat, I unbelievably left behind a paper grocery bag full of movie posters I had bought from the manager of the Jerry Lewis Cinema in Massapequa, a theatre I frequented as a teen. The poster for Mahogany was one of those I had and I lost. I was cruising the internet recently when I came upon an image of the poster. So I decided to watch Mahogany again and relive my memories of this and all the posters I've loved before. 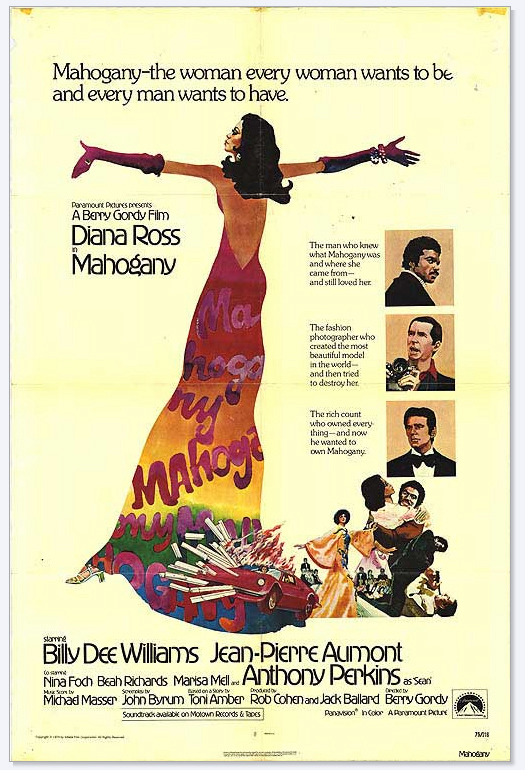 As Mahogany begins: it's not that bad. OK, the shot of ultra successful fashion designer Tracy Chambers (Diana Ross) going back in time to become the girl in the hood is a might cheesy, but there was a nice subtle touch when Tracy is on the elevated train and gets inspiration for a design of her own from a graffiti artist she spies outside the window. Tracy's character is revealed a bit more as the movie continues (home life, work life, studies, meeting future love Brian Walker) but then IT happens: Tracy arrives to work late and is berated by her boss (Nina Foch) as they walk through the workplace to meet photographer Sean McAvoy (Anthony Perkins). The scene ends at the point I've taken the screen shot on the top and the film cuts to a shot of Ms. Ross and Ms. Foch entering the room (screen shot on the bottom). 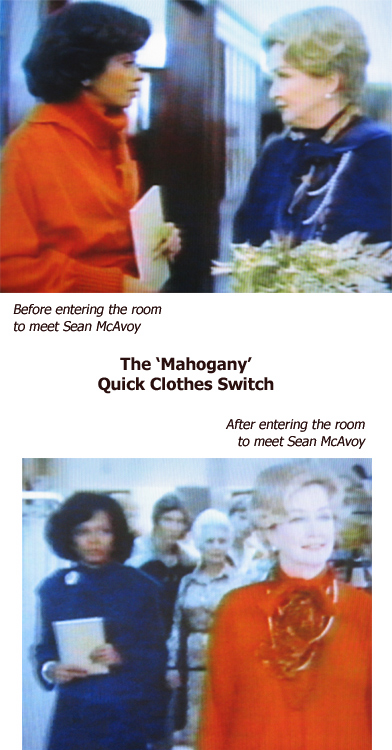 Did they just change clothes? Ross is wearing a red dress and Foch a blue dress in the first scene. But when they walk into the room, Ross is in blue and Foch in red. The clothes are different but Ross still carries her notebook and Foch seems to be wearing the same necklace. There was no reference to the quick change or to it being a different day. The change was subtle but this was bad subtle. They just walk in the room wearing different dresses? Oh, yes, happens all the time. Please, even bad movies need some semblance of character motivation. I kept rewinding and watching it again. (And I was watching my VHS tape which takes time and precision to rewind.)

OK, all bets are off. In order, here goes:


After Mahogany, I decided to quench my thirst for the other side of the boobage scale and watch Pamela Anderson (or as she is billed on the DVD, Pamela Anderson Lee) in Barb Wire. Like Ross in Mahogany, Lee gives her audience what they want right off the bat; over the credits, she does a water dance a la Flashdance, with her tits on high. (And they are quite a pair.) A hot version of Word Up performed by Gun plays over the performance. (In Mahogany, Ross sings her #1 hit over the credits. That's what her fans want. Am I the same person?) You might have to agree to being over 18 if you decide to view the Anderson nudie clip below on YouTube. Seriously.

It's two weeks later and I'm still trying to finish Barb Wire. (Boobage is not always enough.) I can't seem to get past the first thirty minutes but today I will - otherwise, this entry won't be published. I'm back where the soldier asks Barb to dance. I never realized until now that the song the goth chick band, Die Cheerleader, plays in this scene as Barb is dancing barefoot is indeed Dancing Barefoot, a song by Patti Smith. Such subtle character development in a comic book movie! 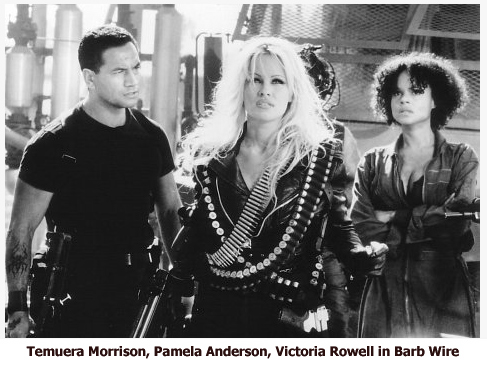 Anderson Lee's prowess as an actress is revealed in the scene where she discovers her blind brother's dead body. (I laughed. I cried. It became a part of me.) Anderson Lee is also suitably droll when her ex-man introduces her to his new wife, a scientist. Barb retorts, "How impressive. I'm sure you'll have very strong, smart children." The best line though goes to Xander Berkeley as Police Chief Willis. After Steve Railsback (as a Congrssional commander) rails, "If Cora D escapes, I will personally rip your heart out of your ass and stuff it back down your throat," Willis deadpans, "That's not very sanitary."

It is also interesting to note that scientist/wife Cora D has had her face altered; the before picture shown to Barb reveals a woman with very Negroid features. 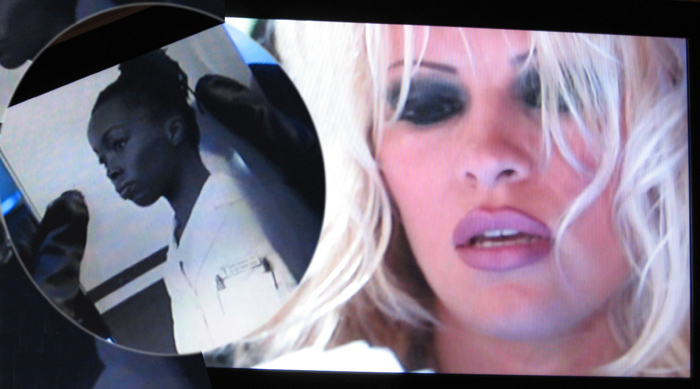 The after of Cora D is very light-skinned black actress Victoria Rowell. Now we can look deeply into this decision and decide that the creators of Barb Wire felt that dark-skinned black women are more intelligent but they needed a prettier, light-skinned black woman to bring in the bucks. Here they use the more mainstream, acceptable light-skinned black woman to propel the movie's story forward while the Negroid actress is relegated to a static picture. Why did the black-skinned actress have to become Michael Jackson? The bad guys made it a point to say that her face doesn't matter as they can tell her identity via a retinal scan. So why change her face at all? Or why couldn't Barb Wire herself be the new Cora D? (Pamela Anderson Lee is delightful as Stephen Hawkings!!)

I finally finished Barb Wire. Of course, all's well that end's well. Except of course for the blind brother, and the dark-skinned actress in the static picture. I haven't seen either since.
Posted by A Man and A Mouse at 6:16 PM