I had not expected Heart to be playing the Denver area as there had been no date announced for the Love Rules 2007 trek. But, three weeks after the tour's announcement, my own heart jumped when Concerts for Kids announced a double bill of fund-raising entertainment with Michael MacDonald and special guest star Heart. What little newspaper advertising there was (buried in a list ad placed in the alternative newsweekly) did not lead me to believe that this was going to attract an audience of Heartmongers. And then of course the unspoken - Heart opening for Michael MacDonald? Someone has a screw loose. With this in mind, I went, on June 8, 2007, to see Heart at the Coors Amphitheatre in Englewood, CO, a suburb of Denver. 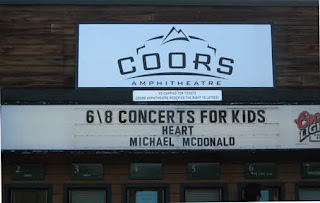 When I approached the box office, the marquee listed Heart above Michael MacDonald. Strange considering Heart was opening for Michael MacDonald. I was offered a ticket in the third row for $1000 (come on, it's for charity) and one in the 9th row for $75. Guess which one I took?

I got there at 7 en pointe to see Heart. There were maybe a hundred people already seated. I could not believe Heart would have to play to such an empty venue. (I've seen the band seven times and never was the venue NOT sold out.) At 7:10, two nattily dressed women and one nattily dressed man came out, and introduced themselves. (I recognized one of the femmes from the local news station.) The three were blathering about the evening's events which had already included a two hour pre-concert banquet. They were now coaxing 400 people from the banquet tent next door to the amphitheatre so they could start the show because 'Michael MacDonald is ready backstage and will be out here in five to ten minutes'.

That's when I woke up. You see, there is no way I'm sitting through two hours of Michael MacDonald Motown covers. Definitely the Doobies. Maybe the early 80s solo period. I know. I know. I'm sure he did those songs but you had to sit through some dreck to get there. Anyway, I had something else I could've been doing. (Someday I'll tell you.) So I left my seat to try and leave the amphitheatre (which is generally a no-no). Now read and learn: I went to the gate and asked for the Gate Supervisor. The Gate Supervisor. He allowed me to leave and come back later. (TIP: Always go to the supervisor.) Whew. I dodged that bullet. So had a nice dinner.and did my something. (8/17/07: add link)

At 9:00 en pointe I returned and took my seat in the 9th row. The blatherers returned and announced their intention to auction off items signed by, as local TV personality Molly Hughes so painfully pointed out, "Heart and the Williams sisters and Michael MacDonald band." (TIP TO MISS HUGHES: Investigation before blathering makes you sound more intelligent. And frankly, I was shocked that the constant - Ann and Nancy Wilson make up the core of Heart - was not a basic fact to her. Criminy, everyone knows that.) The amphitheatre had filled up by now although the lawn and rear seats were sparse at best. (I believe the venue holds 8-10,000.) The audience was monied, skewing older (I saw 60s), and dressed to the nines. They were somewhat snockered from the banquet, and chatting away throughout the rest of the show. I was right; not a Heartmonger crowd. I begin to wonder if Heart's set list will be different because of this.

The auction was for two standard wood acoustic guitars (recently purchased at the Guitar Center, I'm sure) that had been signed with a Sharpie, as it turns out, by Ann and Nancy Wilson and Michael MacDonald (no band). The auction itself was pitiful although it was obvious that people have money to spend. MacDonald's guitar sold for $8000; Heart's $12,000, (Yes! Heart! I knew you should headline the show.) And at 9:10 pm they did.

CAUTION: Before beginning the concert recap, I must make two points regarding the videos you can click on: the sound in the venue was HORRIBLE. And the crowd spent a great deal of time talking amongst themselves. That said, enjoy the videos with a grain of salt.

Out of the box, the band played Magic Man. It seemed they were not hedging their bets.

Good tactic as it turned out. The crowd was on its feet and screaming. I guess thirty years ago these older folks knew Heart AND this song. I was a little disappointed (as I read they opened the Dallas show with Mistral Wind) but the performance was good and the crowd was pumped. I assumed this was going to be a hits show - there's no way I'll be hearing This Man Is Mine tonight. (Not that I ever hear This Man Is Mine. And yes, I love the album Private Audition - and have it on CD, puff, puff.)

After Ann's opening comment about 'rocking us with all the breath they can muster', she took a deep one and the band went right into Little Queen, an admittedly odd choice if they were doing what I had predicted but it was a single and I believe Top 50 so it did fit. The audience stayed on their feet and danced (which impressed me), and Heart was winning me over yet again. I love Little Queen.

Next, they start the drum beat (?) at the beginning of Straight On and the audience started sitting down in droves. I knew what was coming and was not sitting down. I was dancing to Straight On, man. Then Ann started, "Quite some time..." Immediately, the audience got back up and cheered and danced! This wasn't even a 'huge' hit; it peaked at 33. (Wait, that was Dog and Butterfly. Maybe Straight On peaked at 14.) But the audience obviously knew and loved the song and Heart did a bang-up version. In fact, the band was incredible. Ann and Nancy. What can I say? Every time I see them it's like the first time (and I've been seeing them since 1978.) The new girl playing the keyboards was phenomenal. Her Magic Man tremoloes were amazing. And the guys were just as much a part of the band, all excelling in their areas. (I'm not a musician and don't know a guitar from a bass.)

Love Alive was next. The Epic stuff was really being played.

Following, Nancy told the story about receiving a fan letter, sweetly bringing it full circle to the Concert for Kids and sequeing into a hot version of Bebe Le Strange.

The next song was a Nancy solo. The audience (as I) loved the song and the performance. I did not recognize it but here is a video for the last half. What's the title? (Thanks to Anonymous who let me know that the song is Tom Petty's You Wreck Me. Must be a newer song because I know his earlier stuff. Hmmm...that sounds pretentious, doesn't it? I'm really not. Really.)

They slowed the pace down with Dog and Butterfly followed by These Dreams. The balladic pace continued with Alone, a beautiful acoustic version. Halfway through Ann used her voice for the build (rather than the instrumentation as on the track) and the crowd went wild, standing and singing for the rest of the song. Next was another tour de force: Heart covers the Who's Reign O'er Me. It was incredible. I was dumb struck and awe struck and only realized halfway through the song that I wanted to see this again. The video starts in the middle and that's my melodious voice closing the clip. Incredible vocal, Ann.

Barracuda followed and I sat down. I love it but I needed a rest. One blonde bimbo tapped me and said, "You're the Heart guy. How come you're sitting?" I guess I became the Heart guy because of my shout out to Ms. Hughes that is was 'the Wilson sisters, for Christ's sake, not the Williams sisters' as well as my Desire Walks On shirt. (Yes, I have one. It's a promo for the record.)

NEWS: Have you heard Fergie's version of Barracuda? Faithful cover with nothing new or interesting added but Fergie does a credible job as a rock singer. Hearing this new version though made me long to hear the original. And, I am so glad they didn't insert some ridiculous rap in the middle of it.

I got up again as Heart closed the show with Crazy on You. I was, after all, the Heart guy.

The first encore followed with covers of Black Dog and Misty Mountain Hop (not D'yer Mak'er as previously reported) by Led Zeppelin.

A second encore ended the show with Dreamboat Annie.

Man, those ladies rocked this Denver suburb. I can't wait to see them on August 27 at the Mountain Winery in California where they've sold out two shows again. (This will be a Heartmonger show as it has been the last few times I've seen them there.) Ann gave us Coloradans a glimmer of hope though when she left the stage saying something to the effect of 'we'll be back' and gave a wink. I know she was speaking directly to me and not that guy (or gal) who paid $12,000 for a guitar for tax purposes. (FYI, I'm not really a Coloradan. I'm a Californian but that's another story.)

Heart really took this audience over the top considering it's collective drawbacks. And even with the bad sound, I would guess that most of them left the venue as Heartmongers-to-be, or Heartmongers for a night, or Faux Heartmongers. Whichever you choose, they'll be telling their friends, "Heart Rocked! in Englewood, CO!"

It's got to be you reading my letter!

As a long time fan, I thought I'd make a request. This Man is Mine, Allies, Love Me Like Music, Will You Be There, Here Song/Devil Delight, Cook With Fire (...for the first time in Memphis...), Bright Light Girl...I can go on but I won't. Well, I'd freak if the set list was mixed up a bit with, okay, one of my favorites. I'll be at Saratoga on the 27th (not the 1st). Now forget that you read this. It's embarassing. Although I feel like a kid again. I think this is a fan letter. No. It's a fan log. It's a flog. Congratulations, ladies, for being the first to be honored by a flog.